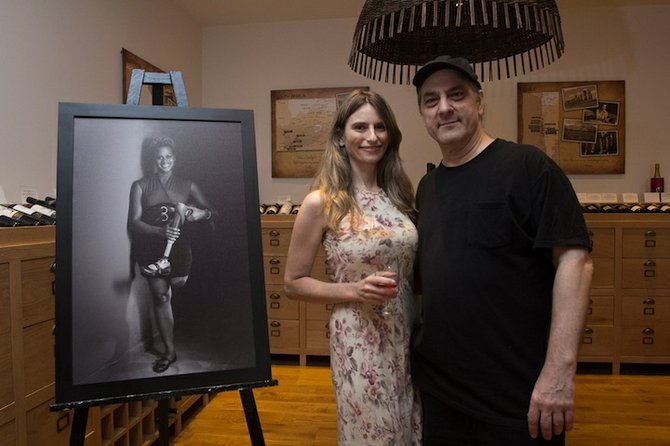 The full exhibition will be mounted as the Bahamian Collection at the National Art Gallery of The Bahamas (NAGB) in July 2013, as part of the NAGB’s programming for the 40th Anniversary of the Bahamas’ Independence.  The goal of the project is to create a permanent collection of photographs to provide recognition, foster cultural awareness and create a record of the people who make the Bahamas unique.  The project by the two photographers is a collaborative effort with the NAGB and Popopstudios.  Ms Wells told Tribune Entertainment: “The photos were all done by Mr Wells specifically. It is his idea and creation. It was something that he wanted to do after his friend, Jackson Burnside, passed away so suddenly.  He was very sad that there wasn’t a legacy like this to document Mr Burnside’s life. So that is when he sort of embarked on this project.”

“Erin Brown, she was recommended to us by a few different people. They suggested that we should photograph her. We did not know her at all, but we called her in and spoke with her and she seemed like a very lovely lady. She had a very positive attitude, which is one of the important requirements for this project. The people who we photograph, we want them to be positive representations of Bahamians and the society,” said Ms Wells.  Ms Wells said Erin told them about her story of losing her leg due to cancer in her early twenties.

“A lot of people may have fallen into depression about that or given up, but she didn’t at all. She found out she had cancer and she said okay cut it off, I just want to move on with my life. She just picked right up and moved on and now she is a very positive role model for the people who are in similar situations. It doesn’t have to be a disadvantage, as proven by Erin,” said Ms Wells.  Ms Wells said Erin’s photo is a reflection of the entire project because all of the people that were chosen are people who are positive role models for the Bahamian youth. She said they are people who have contributed to society in one way or another.  “Some of them are not well known at all, and they have not contributed anything in terms of monetary value, but they have been there as positive role models in their own way,” said Ms Wells.  Oswald Stubbs, Ms Wells said, “sits at the main post office building and he doesn’t do anything really, but he has a tremendously positive spirit.”

“When you walk past him, you will see that he has always got a happy smile and cheerful words for you. It is not about whether you give him top dollar, or put anything in his pocket, he doesn’t care about that. All he cares about is if you are having a good day and he makes that quite clear.”   She said The Bahamian Project will reflect people like Ms Brown and Mr Stubbs. “People from the upper echelon of society to the very people who are most unknown. All of these people have a very positive representation and spirit,” said Ms Wells. Ms Wells said all portraits will be displayed in black and white. “These here today are 20 by 30 inch images and we wanted to go even larger, but we are still very actively seeking funding. It is very costly so our limitations in terms of what we can do, falls on funding,” she said.

For each portrait, Ms Wells said different lighting and sets were created. She said each individual is treated separately, so everyone is not getting the same lighting. “They all get a completely new lighting set up and completely new idea specifically for what we want to portray with that person,” she said.  At the end of the first year, the NAGB will host an exhibition of the photographs as part of their programming scheduled for the 40th anniversary of the Bahamas’ independence. There are also plans to publish a high-quality coffee table book with the final images, information on the portrait subjects and behind-the-scenes photographs of the production.  For more information, visit the The Bahamian Project Facebook page.

By:  Alesha Cadet
Source: The Tribune