HOPE IS A WEAPON began as a street art/graffiti tagging public project in the 9th National Exhibition at the National Art Gallery of The Bahamas in 2018. Angelika says she wanted to create a project that would reach so many Bahamians, it would cause a ripple effect. And it has.

“I wanted whatever my contribution was to this exhibition to be accessible to every Bahamian. That’s what the street tagging allowed for,” said Wallace-Whitfield.

Below is a statement from Ms Wallace-Whitfield on the message behind her art.

Hope is the enduring belief in attainability, in spite of. Hope gives us confidence to pursue life with enthusiasm. Hope is intrinsic to faith and nourished by patterns & habits of care. However, we have become desensitised to hope: the word and the concept, through inattentive overuse of the word. Hope has become euphemistic; it is what is offered, indifferently, in reaction to good or bad news.

Hope, with human action behind it, becomes a weapon.

Almost any inanimate object can be a weapon if employed as one. Weapon, through definition, indicates an object that is used as a means to an end. However, the end is typically only attainable with human conviction behind the object. It is the conviction behind a screwdriver or hammer that changes its categorisation as a tool to that of a weapon. Hope, with human action behind it, becomes a weapon. 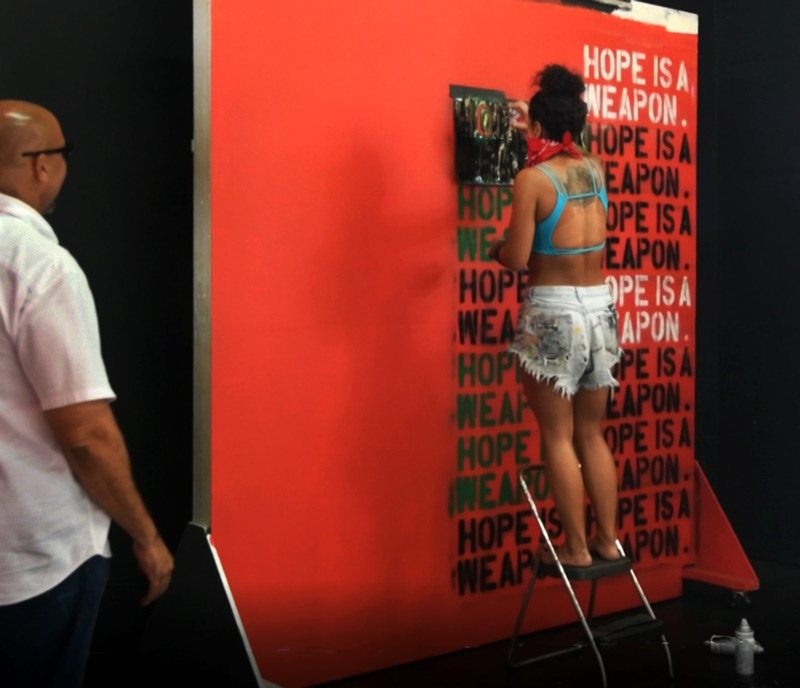 The duality of “HOPE IS A WEAPON.” centers itself around the awareness of the original concept: using action and intention to achieve an attainable end. Hope becomes a weapon that can hurt whomever is hoping, if all they’re doing is aimlessly wishing for something. On the most surface level, you cannot hope to win the lottery if you have not purchased a lottery ticket. Delving deeper, you cannot hope to change the things about your life that you are displeased with, without action behind that hope.

Hope is a weapon, when used as one.

One Reply to “Angelika Wallace-Whitfield”