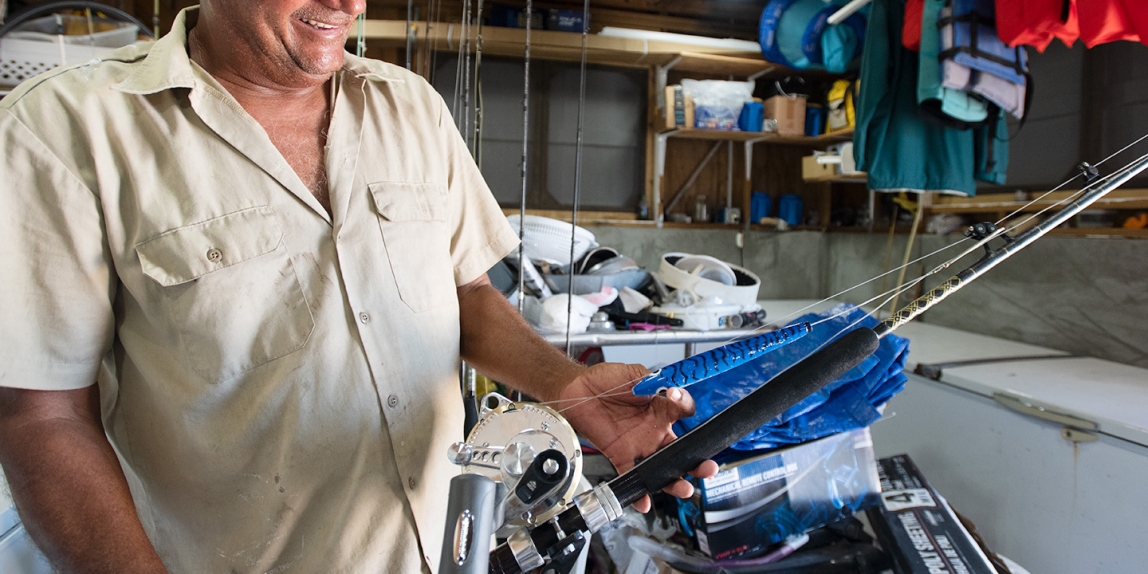 Bag after bag of frozen fish was being removed from a large panel truck at Constantakis’s fish house in Pettys, Long Island. We had just come from interviewing Yan Turnquest, a local commercial and charter fisherman with the intention of talking with the owner George Constantakis, but had arrived in the middle of a catch being unloaded from “Hook n Run II”, Yan’s 45 ft commercial fishing boat, which for this run was under the command of Yan’s son Chavez.

This catch consisted mainly of grouper and snapper, some whelks, and minor amounts of other fish. The 45-50 pound bags of each fish were carried from truck to scale, weighed, and the totals tallied under the watchful eye of George.

The bags were then carried, one by one by the boat’s crew and the fish house’s workers, into the bulk freezer for later shipment to Nassau. Another 30 minutes later and we would have missed the unloading of the roughly 5,000 lbs catch, as this was the last run of the season for “Hook N Run II” and the last run of the season for Long Island’s commercial fishing fleet whose home port is Salt Pond.

Although commercial fishing for species such as snapper and grouper could be done from mid-June through the end of July, the Long Island fleet takes off during this time for maintenance and repair of their boats in anticipation of the start of the crawfish season on August 1.

Crawfish is the BIG money maker for these fishermen and they can’t afford to not have a boat all ship shape for its start.

The importance of this day is reinforced by a blessing of the fleet done a day or two before by one of the island’s priests/fathers.

For these fishermen then, August 1 to roughly mid-June is the time they will go out for ten to fourteen days and fish the waters between the islands.

Commercial fishing is an important part of the Bahamian economy, providing work for about 12,000 people which include fishermen, fish vendors, boat owners or processing plant owners and workers.

Its $100 million of economic activity accounts for roughly 2% of the country’s GDP and is a significant contribution to its foreign balance of payments (1) and accounts for nearly a third of its domestic exports (2).

Although Long Island’s six boats seem a small number, they make their contribution to this important Bahamian business, one dominated by the single fisherman, owner and operator of a boat and business answerable only to themselves.

And that is why Yan Turnquest turned to fishing when he was a young man. Like many Bahamian youth, he grew up knowing fishing by going to the flats or shore for recreation or when the family needed fish for a meal.

But fishing wasn’t something that put “bread on the table.”

So in his late teens, Yan had to begin to think about what he would do for a living. For him, construction and fishing were the options he considered.

Although both required apprenticeships, fishing for him was the better option: although dependent on weather, it could be done year-round; fish were a part of people’s diets and wasn’t subject to business cycle fluctuations that construction was; and most importantly for Yan, as he put it “I could be my own boss. And what I got out of it would be what I put into it.”

Yan started commercial fishing in 1984 under the tutelage of George Cast. And as he gained experience and saved money, he bought his first boat, a 35’ Key West named ‘Hook N Run’ and later traded it for a larger 45’ Key West appropriately named ‘Hook N Run II.’

Yan the businessman always has an eye on staying profitable which means doing most of his own repair work, something that all the Salt Pond fishermen do. This may run the gamut from routine engine and electrical generator maintenance to washing the topsides when coming in from a run to replacing wood decks and superstructures, to the constant repainting that all seagoing vessels require.

Because of those unseen emergencies or breakdowns that can always happen to a boat (usually when out on the water), Yan sets aside about 50% of his earnings for this, something that Yan says that you have to know and do but that’s not taught. Particularly in hurricane-prone Bahamas, this is especially important. He’s been lucky that he’s avoided major damage.

While several of the fishing boats found their way inland when Joaquin hit the island, his boat managed to stay in Salt Pond’s harbor after it went through and the water came back. However, he later discovered while out on a fishing trip, that the keel was missing!

Interestingly, Yan said that he had not seen any changes in fishing after most of these hurricanes and that in fact for crawfish, it often improved. There was one hurricane that did affect fishing. And although it wasn’t much of a hurricane in terms of strength, Hurricane Noel in 2007 dumped huge amounts of fresh water flooding Long Island with over five feet of water. The large amount of fresh water upset the salinity balance of the surrounding waters, causing a huge decrease in the fish population.

More recently, the sudden rise in fuel costs has greatly impacted Yan’s operating costs. For him, a typical run of 10-14 days that “makes the circle” (from Salt Pond to the Exuma chain to the Tongue of the Atlantic to the Jumento Cays and back to Salt Pond) will require 800-1000 gallons of diesel for his 45’ boat.

Yan’s main catches are grouper and snapper for which he uses wire traps. However, as noted, crawfish is where the real money is. Roughly 75% of the landed value of the nation’s catch is from crawfish and so it is for Yan.(2) And for Yan it is the most labor intense creature to catch as he and his crew do it all by diving. He doesn’t do stone crabs because of the regulatory issues involved – all boats must be inspected before they leave the dock for cleanliness and have to pass a health inspection.

And just launched this year in time for Long Island Sailing Association’s June Bahamian sloop regatta a large bright yellow pontoon boat outfitted with a rocking stereo system for large groups that want to PARTY on the water.

Some of the faces behind the Long Island fishing industry

Yan admits that this is a much different business than fishing. For those that charter him to go fishing, he really is in the hospitality business and must always be ‘on’ for his clients.

However, this is easy for Yan. He has an engaging smile, bright sparkling eyes, and always keeps the talk, tales, and stories going, even if the fishing might be slow.

When asked about his favorite fish to catch, he mentioned mahi for the show it puts on. But his favorite is for wahoo and the fight it gives when hit. And when asked what his favorite to eat was, his eyes brightened and his normal smile grew to ear-to-ear and he snapped back “black snappa” with the drool almost forming around the corners of his mouth as he imagined a plate of the fish before him ready to be devoured.

4 Replies to “Fishing On Long Island”