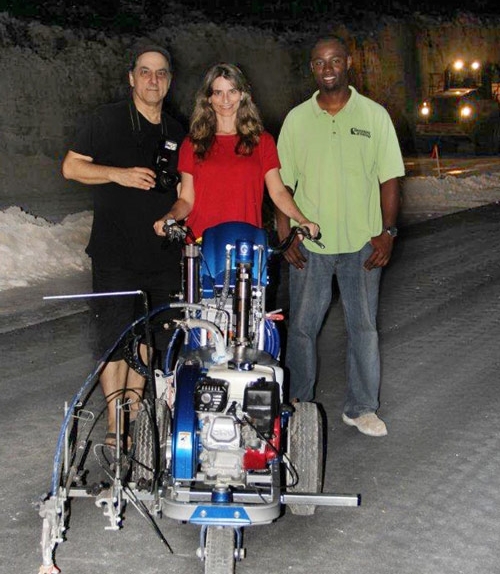 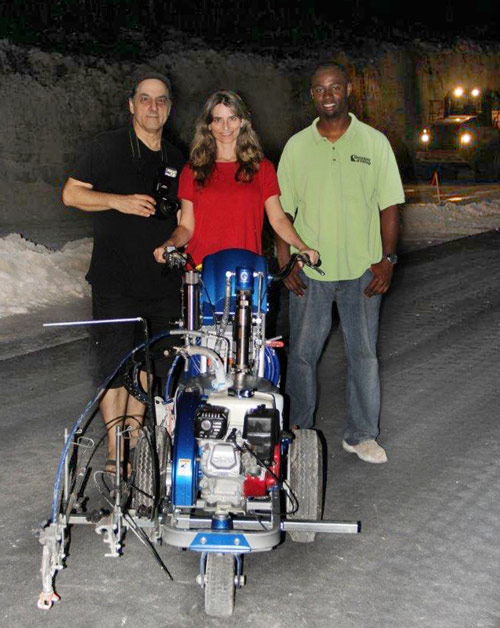 The young President of Bahamas Striping, Atario Mitchell, has been chosen as one of the Bahamians to feature in the landmark portraiture collection “The Bahamian Project” organisers have announced.

The collection of portraits—which reflects and portrays the beauty and distinct character of the Bahamian people from all walks of life—hopes to inspire the foundation of a permanent National Portrait Gallery. The project is headed by award-winning photographer Duke Wells and works in collaboration with The National Art Gallery of The Bahamas and the Popopstudios International Center for the Visual Arts

With Governor General Sir Arthur Foulkes and Lady Foulkes as patrons, the first 40 framed portraits will be unveiled as the “Bahamian Collection” at the National Art Gallery of The Bahamas on July 11 as part of the NAGB’s programming for the 40th Anniversary of The Bahamas’ Independence.

Mitchell was surprised when he received a call from project manager Lisa Wells, Duke’s wife, to be chosen in a group that includes many well-known, illustrious Bahamian leaders and role models.

“It is a great honour to be selected especially with me being so young,” says Mitchell, who in three years has gained national prominence in the media through his company Bahamas Striping. Mitchell, only 26 years old, has been active in donating to the community, in employing and training young men, and in giving them a second chance in life.

As a role model for many young Bahamians, Mitchell represents a breed of young, determined entrepreneurs who combine hard work, self-belief and active engagement in helping and donating to the community. He’s been in the media frequently, promoting his company and fighting for the right to work in his own country. Mitchell believes that employment for young Bahamians is one of the keys to combat societal ills and that his striping industry is just one of many new fields that can be reserved for locals.

In the three years life of his company, Mitchell says he’s managed to meet the initial challenges and he’s thinking bigger. His vision is to create professional road maintenance teams on many Bahamian islands. “There’s a lot of potential to train Bahamians with skills so they can earn themselves a future,” he says.

According to photographer and long-time Bahamian resident Duke Wells, he conceived The Bahamian Project to show the nation and the world a fuller understanding of “what it means to be Bahamian”.

“This is a diverse country with a special charm. More than the sun, sand and sea, it is our people who convey the magic of what it is to be Bahamian, through their character, spirit, industry and culture,” says Wells.

“Many countries have national portrait galleries that only focus on leaders:  presidents, prime ministers, governors, business or religious leaders,” said Wells. “What we wanted to do was to show the real faces that make up the spirit and soul of The Bahamas.”

“We want to show the great diversity of our people. Atario is a role model and highlights the enterprising attitude that we want to expose to our youth. Like many young Bahamians in the trades, he shows determination in stepping up and working with the big boys in a tough industry.”

“Atario shows that almost any Bahamian with a good enterprising idea can achieve success in a short time,” says Wells. “We’re proud to have him in our collection along with the other outstanding young Bahamians, dignitaries and man-on-the-street characters.”

With the NAGB and Popopstudios as partners, the Wells’ are aiming for a three-year project with about 60 photos in the first year, each large image printed on canvas and framed in a way befitting its entry into the national portrait gallery.

“Our goal is to have the collection of portrait images, known as The Bahamian Collection, travel to other galleries, showcasing the beauty of The Bahamas through its people and securing on-going exposure throughout the country and the world,” says Wells.

The Bahamian Project intends to publish a coffee table book of the portraits. The project, which aims to be an ongoing series, depends on raising funds through donations for the many financial needs, including traveling to the Family Islands for more photo shoots. If donations and funds are forthcoming, the project aims to showcase the collection throughout the world with visiting overseas exhibitions.

Project Manager Lisa Wells says, “Through the generosity of our sponsors and public donations, the Bahamian Project will preserve, sponsor and present to the public; photographic exhibitions, portfolios, books, lectures, videos, seminars and workshops that show the beauty and character of the people of The Bahamas.”

Caption: Creative founder and photographer for The Bahamian Project, Duke Wells (left), and his wife and project patron Lisa Wells (center), chose Bahamas Striping’s President Atario Mitchell (right) in “The Bahamian Project”, a collection of portraits of Bahamians to be exhibited at the National Art Gallery. The portrait photo shoot took place at one of Mitchell’s work sites, the new Airport Gateway highway where he used his Graco airless paint sprayer to stripe the roads.